Braves Walk Of With 2018 Championship

Game 7 would see a matchup of Chris Sandini for Revere and Mike Smith for the Braves. Sandini would be pitching on three days rest having picked up the Game 3 win throwing six strong inning. Smith was going on one days rest, having just pitch a 4-0 shutout in Game 5. 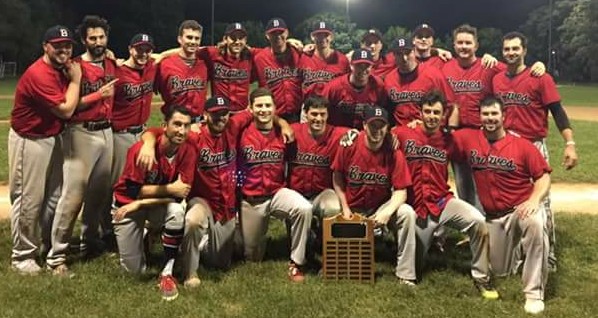 While both teams had chances, the game would remain scoreless through seven innings to go extra innings. In the top of the eighth inning Revere would mount a two out threat as both Adam Del Rio and Ryan Petrone would reach base. But Smith would end the threat, getting Kenny Polanco to ground out to second.

In the bottom of the eighth, Alex Haslam lead off against Jon Shepard who had come in to relieve Sandini in the bottom of the fifth. Haslam would reach on slow roller to short. Haslam would advance to second on a steal of second as Ari Glantz was attempting a bunt. After failing to advance Haslam to third with a bunt, Glantz would drive a single down the left field line, to score Haslam to give the Braves the 1-0 walk off win.

Mike Smith earned MVP honors winning games one, five and seven. For the series Smith pitched 22 inning giving up only 2 earned runs for a 0.63 ERA.

Congratulations to Ted Tracy and all the Brighton Braves.