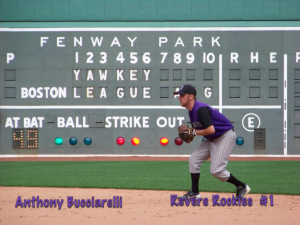 Anthony Bucciarelli is in his tenth season as a player for the Revere Rockies, and in his second year as the club’s manager. He has been a regular fixture in Boston baseball for many years, and not just as a player-manager, as you’re about to find out.

Where did you grow up?
Northboro, MA

Where do you live now?
Worcester, MA

Where did you go to college?
Fitchburg State College

When is your birthday?
February 10

Do you coach anywhere outside the YBL?
Not currently, but previously I coached 12U AAU in 2010 and 13U in 2011 for the New England Stampede.

What do you do for a living?
I work for Verizon Communications, managing Verizon Technicians that install and repair Verizon FiOS

What baseball awards / honors have you won in your life?
Several Premier Player Awards in the MABL for 2B and a Gold Glove and Silver Slugger in the YBL.

Tell me something about you that people wouldn’t know.
I was the Boston Red Sox third base ball boy from 1995-2000 and was on ESPN several times because of plays I had made.

That’s so awesome. What was the coolest thing that happened while you worked at Fenway?
Getting to work the All-Star game at Fenway in 1999, and being on the field for all the festivities (Futures Game, Home Run Derby, and All-Star game) and getting to meet Tony Gwynn. Told him he was one of my favorite players growing up and he responded with “Thanks little guy.” Also, in 1998, the White Sox were in town and I was on the visitor’s side of the field before the game. Next thing I know I was talking with Scott Eyre and all of a sudden he pointed out several attractive ladies that sat down in the front row near their dug out. I told him that they’re sitting right behind me as I pointed to the chair I sat on every game as the ball boy. He asked me if I got a foul ball, if I could give it to one of the girls and tell whoever I gave it to, that it was from him. Sure enough in the 2nd inning I got a foul ball, handed it off to the girl, told her it was from Scott Eyre and he leaned out of the dug out to wave to them. The next day, to repay me, he took me out to Waterworks in Quincy that night and I was sitting in the VIP room with him and Chris Snopek, eating and drinking on the house.

Favorite MLB position player of all time?
Tough for me to pick one as I loved Wade Boggs and Tony Gwynn growing up.

What are the three best movies you’ve seen in the last year?
American Hustle, Bad Grandpa, and Dallas Buyers Club.

Who is the most underrated player on the Rockies?
Nate Laliberte. Consummate team player and he can play any position in the infield. Last year in the playoffs, he was the major reason for our run to the finals, having to play SS due to the injury to Luis [Rodriguez] and he played great defense there.

Who else on the Rockies would make for an interesting interview?
Chris Santosuosso. Not to disrespect or snub anyone else in the league, but I don’t think there is another player in the league that cares about winning more than him.

Who have you most looked up to in the YBL?
Bernie Driscoll. He was considered the best when I came into the league and every year, I worked hard to beat him out for every award given for second basemen.

Who is the toughest pitcher to face in the YBL?
Well I only faced him once two years ago in the 1st round of the playoffs, but I would have to go with Jeff Allison. The command he had of his pitches, he consistently painted the corners with ease and the pop he had on his fastball, which he did all so effortlessly, was impressive.

What was the most exciting moment you’ve had in the YBL?
It would have to be playing in the All Star Game at Fenway, but making the YBL Finals in my first year as Manager of the Rockies was as exciting as well.

How would you improve the YBL?
There are some little things but overall, but I can’t complain, because at 37, the league gives me the ability to play the game I love.

What are your hobbies/passions outside of baseball?
Golf and spending time with my niece and nephews.

What was the greatest accomplishment in your life?
Locking up my wife for the rest of her life and finding out my fishies could swim.

Who is the most influential person in your life?
My father. I could use all the clichés in the world about him as a father, and every one of them would be true.

How does your wife handle your baseball habit?
She is not the biggest fan of it, but knows that it is something I love to do, so she puts up with it.

What drives you to keep playing ball every summer?
The boys. Over my 13 years playing in the MABL and YBL, I have developed some great friendships with guys I have played with, and guys I have played against, and I have both leagues to thank for that. There is nothing more that I look forward to after working all day than playing baseball with my friends. 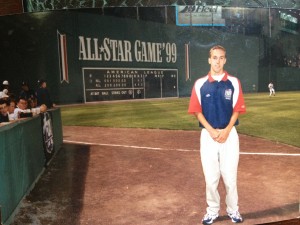