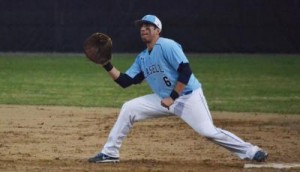 Is there a hotter hitter in the Yawkey Baseball League than Brighton Braves All-Star First Baseman Billy Uberti?  Currently atop the YBL leaderboard with a .509 batting average and an ungodly .606 OBP, the Brighton Braves slugger is putting the finishing touches on a monster offensive campaign, with many of the YBL faithful considering him a strong MVP candidate.  Flashing gold glove caliber defense to complement his offensive prowess, Billy was recently selected as the starting first baseman for the YBL squad in the 2014 EMass All-Star Classic, providing several clutch ABs in the league’s 15-10 defeat of the Boston Park League.

#6 in your programs, but #1 in your hearts… get to know Billy Uberti:

Do you coach anywhere?  Next fall I begin my coaching career as an assistant at Lasell College

Most Underrated Player on the Braves: Brendan Ryan, pitcher with great mound presence, spots his pitches and has good stuff. I wouldn’t want to hit against him.

Who else on the Braves would make for an interesting Interview: Smitty, the guys got great stories from 10 plus years in pro ball

Who have you looked up to in Yawkey League?  Teddy Dziuba (Somerville) He is one hell of a ballplayer, but also plays the game right. Every time I compete against him, with him or talk baseball with him I learn something to make me a better player.

Toughest Pitcher: Chris McKenzie (Somerville): I haven’t faced every pitcher in the league yet, but he’s got the type of stuff that when he gets you out you tip your cap to him. Not many pitchers I would say that about.

Toughest Hitter: James Katsiroubas (Al Thomas): kids rakes someone who will capitalize on any mistake

Most Exciting Moment in YBL: Playing in the All Star game at Fenway Park

How would you improve the YBL?  Make trades possible if both players agree on it. I think a trade system will allow teams to better develop and bring some tension to the league.

What was the greatest accomplishment of your life: Being the captain of my college team, always an honor to wear the C

Most Influential Person in your life: My father, he taught me everything I know on and off the field. He is gone but his lessons will live with me forever.

Do you have any pets: Female boxer named “Miami,” best dog in the game.

What drives you to continue to play baseball: I simply love the game, and until I am unable to produce at a high level I plan to continue being a ballplayer.

YBL 2014 Playoff Prediction:  Since the Braves are out I’m going with Somerville, hard to pick against them until someone takes them down in a series.