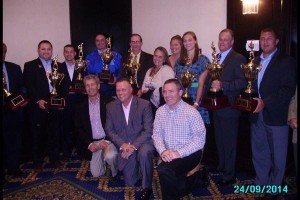 For the 5th consecutive season and the 15 time in the team’s history, the Somerville Alibrandis Baseball team was honored by the BoSox Club at a luncheon held on Wednesday, Sept. 24 at the Dedham Marriott Hotel. The BoSox Club is the oldest official fan club in Major League Baseball and promotes the game at all levels while assisting the Boston Red Sox in community and charitable endeavors. The team from Somerville were honored for their 2014 season in which they went 34-8-1 and defeating the Al Thomas Athletics in the Yawkey Baseball League Championship Series.

“The BoSox Club’s recognition of the accomplishments of all the local Champions is truly outstanding,” said Team President, David Treska. “Acknowledging the success that our team had last season is a tremendous honor and we thank the BoSox Club once again for inviting us.”