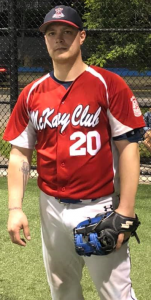 Curran is in the second year of his second stint with the McKay Club. Now primarily a pitcher, Curran previously played for the McKay Club from 2008-2012.

The no hitter by Curran is the third no hitter thrown in the Yawkey League this season. Congrats Bryan.