The Alibrandis are the Pride of the YBL Once Again 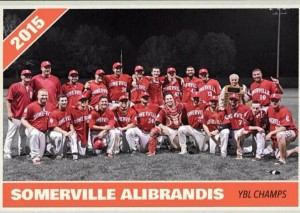 After a regular season that saw 4-5 teams vying for the best record heading into the playoffs, the Somerville Alibrandis have yet again risen to the top of the heap to take down their 16th YBL Championship trophy…..and their 6th in a row. As always, Somerville came into 2015 with a huge target on their backs. And this time around, it seemed like this was the year they might regress into the middle of the league’s top half. They had lost a few of the key pieces from their 2014 championship campaign…..most notably, YBL legend Marc ‘Doc’ DesRoches hung up the spikes to selfishly spend more time with his budding family, as well as embark on a new challenge by joining the YBL’s Board of Directors. Additionally, Kevin Salines, Logan Gillis, Chris McKenzie and Justin Cristafulli were integral parts of the 2014 title squad, but were all essentially out of the picture this year for various reasons. Even Lamarre Rey was initially thought to be out for the season with a trip to play big boy baseball, but the Big Kahuna Burger came back not a moment too soon to help the 6-4 Alibrandis return to form. Despite these losses, manager Bernie Driscoll and his trusty steed Cameron Lynch were able to add back a few pieces and fill some holes, in particular bringing in David Lightbody, Charlie McConnell and Billy Karalis.

After an uncharacteristically slow beginning to the year, the return of Rey seemed to kickstart the Alibrandis who would go 15-4-1 over the final 20 games of the season. Lamarre won 5 games striking out 55 batters in 36 innings, while accumulating a sub-1.00era. Jon Morse, Sean Sullivan and Chris Foundas ate up the lion’s share of the remainder of innings, combining to go 15-3 with a 2.00era. Brian Tanguy was the back-end stopper as usual, making the most of rare save opportunities. Rookie McConnell would lead the team in hitting, posting a .358/.476/.418 slash line. Mike Maguire, Anthony Perry and Bobby Barrett would all hit over .300 on the season, and Barrett led the team with 22rbi. The 2nd-half surge was enough for Somerville to hold off the Stoneham Sabers and claim the 2-seed heading into the postseason tournament, behind only the markedly improved East Boston Knights and their gaudy 25-5 record.

At some point in early August, Bernie’s team found that extra gear and went to work doing what they do. In the first round, they dispatched the meaty South Boston Saints in 3 games with a combined 27-6 score. They would follow that up with a 3-1 series win in a tougher battle against the Sabers (who were without a couple top players in 2015, so perhaps they were a little Light. LightSabers? Anyone? No? Ok.) before moving on to the championship round.

On the other side of the bracket, the Knights were doing similar work of their own also going 6-1 in the first two rounds with a 3-1 series win over the South End Astros and a sweep of the Revere Rockies. As was the case in the regular season, Marty Dunlap paced the Knights in the playoffs on offense, and they had their own firing squad on the mound with Ockner, Allison, Mendez, Shepard and Carlson. This had the makings to be an epic championship series, a chance to take a piece out of the legend that is the Somerville Alibrandi baseball club. If Eastie could have kept the mojo going, they may have been enjoying their second Gatorade-bath mound party in a span of 2 weeks.

Alas, it just wasn’t meant to be. Somerville straight out steamrolled the top-seeded Knights in four straight, outscoring EB by a tally of 37-15. Game 3 will go down as one of the best and craziest games in league history, as countless league followers were glued to their phones like 4 year olds, watching social media updates throughout the see-saw affair which eventually ended in a 12-11 Somerville win.

Former MVP and now grizzled, really old vet Maguire anchored the outfield and was a table-setter in the playoffs. Barrett terrorized EB pitching with a .571avg in the finals while simultaneously taking his selfie game to the next level. Perennial MVP candidate Sir Thaddeus Dziuba had a bit of a down year hitting a pungent .245 in the regular season with 3hr and 17rbi. Under the threat of becoming the team’s 2016 mascot, Teddy ramped up his contribution in the playoffs with a .455avg, 13runs and 11rbi. Lightbody, brought in as a much needed bat in the middle of the order whose run-production in years’ past screamed RIBBIES in this lineup, toiled in mediocrity over the regular season. But he saved his best for the playoffs with a .444avg, 3hr and 15rbi….only four RBI off of the YBL postseason mark for runs batted in when Marc Hordon knocked in 19 runs in 12 games of the 2007 playoffs. Karalis on the other hand had a solid summer leading up to the tournament with a respectable .284avg, 3hr and 15rbi. However in the playoffs he…..he just…..well…..sweet cracker sandwich, the kid went nuclear. Karalis arguably had the most prolific postseason in Yawkey League history. Over 38 at-bats he put up a ludicrous .526/.535/.947 slash including 7 doubles, 3 home runs, 14 runs and a 5:0 steal rate. Oh, and he also shattered the aforementioned postseason mark for run production, knocking in 26 runs in only 11 games. It’s safe to go out on a limb and award BillytheK the postseason MVP award.

When all was said and done, 2015 belonged to Somerville. They are the Yankees, Patriots and Canadiens all rolled into a dirty, red and white powerhouse. Love them or hate them, they are the closest thing to a consummate team that this league will likely ever see. They play hard, they stick together, and they are a thoroughly respectful organization on and off the field. A customary tip of the cap to Bernie Driscoll, Cam Lynch and the Somerville Alibrandis…….the Pride of the YBL.