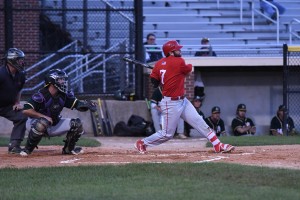 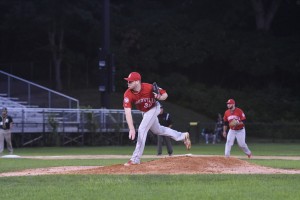 *Photos courtesy of Craig Henry (craighenry@mac.com).  For more from Game 1…

As has been very common this post-season, home field advantage has been quickly stripped from the higher seed.  I’m sure this doesn’t matter to teams like ATBC and Alibrandis as they are equipped to pitch, hit and play defense anywhere, anytime.  Game 1 saw the #1 Al Thomas Athletics get out to a 1-0 lead in the 3rd which only started a night of two heavyweights standing in the middle of the ring going toe to toe trading punches.  Alibrandis tied it in the 4th and ATBC would quickly take the lead once again.

Alibrandis would score late runs in bunches which has been the rule lately, putting up 5 in the 5th.  RBI doubles by Teddy Dziuba and Will Brennan would be the key run scoring hits while Bobby Barrett would continue his torrid pace chipping in with 3 more hits.  The story on the mound for the Red Army was the Red Ace, Sean Sullivan.  He limited the vaunted ATBC offense to 4 hits and 2 runs, one earned.  He kept his defense busy all night and they made the plays.  He moves his career post-season record to 13-0.

ATBC played a nice mix and match game with their multi-faceted bullpen, including the return of playoff stud Willie Archibald, who threw a scoreless inning with one strikeout.  Their RBI were knocked in by 2016 YBL MVP favorite Freddi Carrera and Mike Hicks.