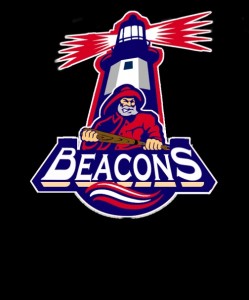 After winning the Yaz Division and #1 seed to make the playoffs in 2012, the McKay Club has struggled to maintain consistency since. The team has suffered the loss of one top player after another. 2014 was a very difficult season for the Beacons. It seems that once some momentum was reached each of the last 3 seasons – rain came and people evaporated.

There are no excuses in baseball. Flat out this Franchise has not performed well on the mound or defensively for 3 seasons. Both of those areas must improve if the Beacons are to contend in 2015.

Pitching is the key to the success of any franchise in baseball and it is hoped that 2015 will see the addition of quality arms to bring the Beacons back to a play-off caliber team.

New Coach Brian Mylett has worked very hard to establish a solid connection with Wheaton College in Norton and 7 current and former Wheaton College players will be joining the McKay Club this season. Here are some great additions that are hoped to boost the starting lineup and starting/relief pitching staff.

The Beacons will be without the on and off field antics of LF Drew Tambling. Drew has been not only been one of the best hitters in the Yawkey League over the last 7 seasons but one of the best in the history of the league. He is, however, contemplating commuting from Singapore so stay tuned on that.

The Beacons will be adding a host of players from Wheaton College. Pitchers Eric Dumas, Jared Clement, Mike Baryski, and Brady Furdon will help a pitching staff that finished at the bottom of the league in most categories last season. RF Matt Lavanchy, LF Kevin Foley, and 2B Justin Peluso have all spent the past 3 seasons in the FCBL and will look to have an impact this season. The Beacons will also welcome back RHP Paul Fahey back after a season in the NYCBL and a solid career at Franklin Pierce.

The Beacons captain Jack Owens returns in CF for his 12th season. Kyle McKay hopes to return behind the plate and help the young pitching staff with his tremendous game calling talents. Robbie Lerro can play any position on the field and will be a fixture in the middle of the Beacon lineup. Lionel Danielson OF was a silver bat winner in 2014. He is a five tool talent who came up short in the voting for YBL – Rookie of the Year honors. He plans to return to the Beacons and do his thing. Steady and solid in the field and at the plate. Dan Brien will help as a solid veteran on this young team. There is a strong wind blowing rumors of a return by Connor Reinfurt to the YBL. Connor is back in the Boston area and plans to play ball.

Dark Horses: Adam Woodhead has a big bat and a strong arm. This young man is looked upon to work at 3rd base and toss in relief. Luke Barkowski was ill most of last season and we hope he can bounce back and contribute on the bump with a strong showing. C – Reza Javaheri & P/1B – John Thomsen of Roxbury Latin are expected back. These 2 youngsters will be bigger and better in ‘15. Rookie Prospect, P – Matt Kerin of Quincy comes with a solid reputation out of Archbishop Williams.

We plan to stress “commitment and dedication to goals” this spring and summer.We fail to call this a rebuilding year. This is a year in which the McKay Club plans to WIN!