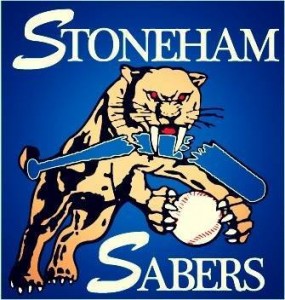 2014 was a season where aspirations for the first playoff seed were realistic up until the last week of the season where the Sabers fell short. The mix of an injury to star rookie pitcher Corey McNamara and the Sabers losing a few close games down the stretch made the difference in the end. However, they found themselves back in familiar territory facing the East Boston Knights for a third straight year in the first round of the playoffs. At the defeat of two previous playoff sweeps against the Sabers it was a long time since the Knights were able to overcome the royal blue.

The Stoneham Sabers are no longer the new kids on the block. Entering their fifth season in the Yawkey Baseball League, the “Stals” enter with a veteran presence hungry for a YBL championship and remain a league powerhouse. Player/Manager Angelo Colucci, Captain Ryan Flanagan, 3 time YBL All-Star Mike Robinson, and Sam Cummings who currently holds a career 1.19 ERA, good enough for an all-time YBL’s 7th best, are the original Sabers entering their 5th season. Lefty specialist Chris Dion, the foundation of the pitching staff catcher Travis Adams, unsung hero Jon Chapman, and the best double leadoff hitter in amateur baseball Joe Parlow will enter their 4th season in the league. The bread and butter of the Sabers’ infield, All-Star shortstop Stefan Botarelli will enter his third full year in the league to round up the veteran presence. Coach Joe Laurina who has been part of the Sabers’ program since day one will be back in uniform. Coach Papa, as all the Sabers know him by, is leaning towards watching from the sidelines to stay more relaxed. However, as the season nears the Sabers hope Papa cannot resist suiting up in his number 36 jersey on game days and keeping the Italian born duo coaching the bases.

The Sabers will have to go once again without original Saber Jake Zelnick as he comes off his best season in the Yawkey League. Zelnick obtained his Master’s degree in counseling from Lesley University and has landed a job back home in Jersey. Peter “Moose” Creamer’s work has taken him to the Texas sun for this season and will be missed in the heart of the Sabers’ lineup. Original Saber and veteran pitcher Greg Dubela will also be missed as he makes his way to Ohio in April. Dubela signed a professional contract with the Lake Erie Crushers from his success in the California Winter League. The Sabers wish Dubela the best of luck while he pursues his professional baseball career. The East Boston Knights will be glad to hear that Saber veteran outfielder Nick Schauwecker, who has been a big part of every Sabers’ playoff campaign has tied the knot and is set not to play this season. However, Saber management is hoping Schauwecker will make an appearance this season to patrol right field to keep the original air marshals together.

With the losses of key players, the Sabers will have a new look to their roster this season. The Sabers hope to rely on pitching, defense and timely hitting to stay sharp again this year as they look to make their way to the YBL finals. Manager Colucci has recruited a handful of new collegiate stars that will be competing for a starting job in the Sabers’ lineup, along with the Sabers’ veterans. Former Bunker Hill and Intercity League All-Star Tommy Lenane will replace Zelnick’s All-Star presence as a new addition to the infield. Tommy’s teammate, Derek Pizarro currently playing at Curry College, Anna Maria’s Shawn Callahan, Patrick Henry’s Curtis Tirone and Merrimack’s Dionys Quezada will also be new additions to the Sabers’ roster.

The strongest point of the Sabers is their pitching staff. Every hurler is back with the exception of Dubela, and the Sabers are hoping to have a healthy McNamara back from St. Joes. Syed Ali who made an appearance last year to help out the Sabers is returning full time this year. Let’s not forget to check out Ali’s LoveYaLifeStyle clothing line! Former Clark ace Andrew Leblanc, Dowling’s Dave Monteverdi and American International’s Joey Zampell will be three more additions to round up the Sabers’ pitching staff.

Last but not least let’s not forget the Sabers’ tenth man, “The Beach.” Known as one of the hardest fields to play and win on for the opposition. The Sabers will continue to play their home games at Recreation Park, where on sunny weekend afternoons Daniela Colucci and Julie Dabenigno will continue to compete with the pool party next door to play Sabers’ walk up music. Once again, veteran outfielders Flanagan and Robinson will continue to patrol their waters at the sandy shore.