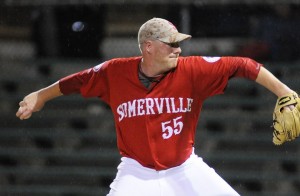 In 2004, Anthony ‘Deli’ Del Prete graduated from Suffolk University and embarked on a baseball career with stints in the Great Lakes Summer League, the CanAm League and the Frontier League, as well as professional stops in Belgium, Cuba and Australia. After hanging up his professional cleats, Deli took over as an Assistant Coach for his alma mater’s baseball program for over 10 years before being named the Associate Head Coach in 2014 and then Head Baseball Coach starting in 2015 (not for nothing, Deli took the team to their 5th GNAC Championship in his inaugural season). Additionally, he has served at Suffolk as the Sports Information Director since 2008 and as an advisory member for the school’s athletic review committee since 2014.

Nowadays, Deli continues to play the game he loves, pitching for the Somerville Alibrandis of the YBL as well as the Bombers on the MSBL 28+ league. And regardless of what comes up when you google his name, Deli can still be found pitching and coaching at a number of fields, typically surrounded by a pile of empty Mountain Dew bottles and pizza boxes. Meet Deli…..

Nickname: Deli
Position(s): RHP
Bats/Throws: R/R
Club(s) Played for in YBL: Somerville Alibrandis
Where did you grow up? East Boston, MA
Where do you live now? East Boston, MA
When is your birthday? June 24– feel free to send a card
Where did you go to college? Suffolk University
What do you do for a living? Head Baseball Coach/Associate Director of Athletics, Suffolk University

If you played pro ball, where have you played? Evansville Otters (Frontier League), North Shore Spirit (CanAm League), Melville Braves (Perth/Western Australian State League)
What baseball awards / honors have you won in your life? GNAC Coach of the Year (2016), GNAC Pitcher of the Year (2002), GNAC Tournament MVP (2002), NEIBA All-Region (2002)
Where do you coach/play outside the YBL? Boston Bombers MABL +28
Been part of any championship teams prior to / outside of the YBL? Boston Bombers (2015), Suffolk University (2002, 2005, 2009, 2015, 2016) East Boston Little League White Sox (1993, 1994)
What years have you been an All-Star in the YBL? 0. Bernie keeps snubbing me
Favorite MLB player of all time? Roger Clemens
What are the three best movies you’ve seen in the last year? Haven’t watched any movies in the past year. Big Blacklist guy though and Billions on Showtime was good
What concerts have you been to in the last year? None…still waiting for Tool to come back around
You’re on your way to a game, what are you listening to in order to get hyped? Kenny Powers: You’re F*ing Out, I’m F*ing In
Read any good books lately? Ron Polk’s The Baseball Playbook
What are your 3 favorite shows right now? Seinfeld (still), The Blacklist, Monday Night Raw
What is the best trip you’ve ever taken? Cuba (twice)
Who is the most underrated player on your team? Mark Addesa – always plays big in the biggest games
Who else on your team would make for an interesting interview? Bobby Barrett
Who have you most looked up to in the YBL? Stan DeMartinis
Who is the toughest pitcher to face in the YBL? I couldn’t hit water if I fell out of a boat so this answer is irrelevant
Who is the toughest hitter to face in the YBL? Teddy Dziuba – whole reason why I jumped ship to Somerville, so I wouldn’t have to face him. He owned me in college (just ask him, I’m sure he would love to talk about himself)
What was the most exciting moment you’ve had in the YBL? Talking an annual prom picture with Cam Lynch after winning a championship or reading Chris Dion’s facebook statuses after he loses
What are your hobbies/passions outside of baseball? There are things to do outside of baseball?
What was the greatest accomplishment in your life? Still looking to improve and be better everyday
Who is the most influential person(s) in your life? My father
Do you have any pets? My girlfriend Amy has a dog (Kenton) if that counts
How does your significant other handle your baseball habit? I think she knows it keeps me sane.
Tell me something about you that people wouldn’t know. Mike Maguire and I once discussed a domestic partnership – only for tax purposes though
What drives you to keep playing ball every summer? The camaraderie of my teammates