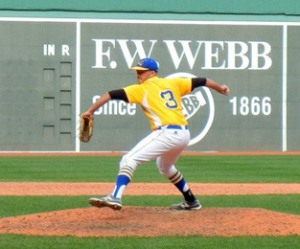 Kendall Chaves joined the Maddogs in the summer of 2013 and has been one of the most reliable, respectful and hardworking players over that time. Kenny has compiled a 13-10 record, with 126 strikeouts and only 58 walks. He has 2.24 career ERA, with a career .959 strikeouts per innings pitched. Kenny has been able to come into the game in any situation because he is one of the most committed players on the team, that has led to multiple spot starts, and 4 career saves. He has appeared in 43 games on the mound and even has 18 ABs, 1 one hit, four walks in 21 career games in the batter’s box. He also destroyed our team ball bucket after one of his five career strikeouts. He does it all.

But what makes Kenny special is his willingness to do whatever the team needs. He’s the best teammate, and competitor. He truly wants the ball. We are all inspired by Kenny because he has that ‘never say die’ attitude.

He was on Babson’s varsity roster for two seasons before joining the Babson Club Baseball team. The varsity coaching staff didn’t think Kenny had what it took, and instead he dominated the club level for two seasons, never looking back. And after two straight seasons in the Yawkey of sub 2.00 ERAs, we know Kenny has earned all the respect he needs. (courtesy of Nick Vennochi)

Where did you grow up? Martha’s Vineyard, MA

Where do you live now? Medford, MA

When is your birthday? August 25th. Same as Blake Lively. She hasn’t responded to any of the birthday cards I send her. Fingers crossed this is the year.

Where did you go to college? Babson College

What do you do for a living? Financial Analyst

If you played pro ball, where have you played, and what was the most interesting city you called home? Still waiting to hear my name called on draft day. All scout inquiries can get directed through @MaldenMaddogs on the twitter.

Do you coach/play anywhere outside the YBL? Where? Emerson College w/ Coach V

Been part of any championship teams prior to / outside of the YBL? NEWMAC tournament champions in 2009  at Babson. Aiz gutted out 158 pitches to upset EConn in the 1-8 matchup at the NE Regional.

What years have you been an All-Star in the YBL? 2014. Fenway was awesome.

What are the three best movies you’ve seen in the last year? Haven’t seen a great new movie in a while. The Martian wasn’t bad. Daddy’s Home was trash. Will Ferrell must have left all his talent in the Ashley Schaeffer wig.

What concerts have you been to in the last year? Does hearing Coach V quote Drake lyrics every Tuesday count? If so, that.

You’re on your way to a game, what are you listening to in order to get hyped? Stone Cold Steve Austin’s entrance music on repeat. And that’s the bottom line.

What are your 3 favorite shows right now? Bob’s Burgers is hilarious. I just found out about Chopped thanks to Jed Drake, so I’m on a big Food Network kick right now. And Cops. You can never watch too much Cops.

What is the best trip you’ve ever taken? I went to Vegas last year and our flight got diverted to Palm Beach, CA due to weather so we had to rent a car and drive 4 hours through the desert to get to Vegas. After being up for almost 24 straight hours, the feeling when we drove up and could see the lights of the strip made it all worth it.

Who is the most underrated player on your team? Lopes. Not in the sense that people aren’t aware of his talent and stats, but the way he manages the pitching staff and is a real team leader might go unnoticed by outsiders.

Who else on your team would make for an interesting interview? Maybe Rayner? Better yet just interview the whole Goon Squad as a unit – that’d be one helluva read.

Who have you most looked up to in the YBL? The original Dogs that I’ve gotten to play with – Sabs, T, Buddy – guys that understand the game and have fun with it.

Who is the toughest pitcher to face in the YBL? They don’t let me hit anymore. Probably safer that way, otherwise it’s just weak infield contact and nobody needs to see that.

Who is the toughest hitter to face in the YBL? Teddy Dziuba. Always finds a way to turn one around. Gotta be that Babson education.

What was the most exciting moment you’ve had in the YBL? Fenway in 2014 was great. Been a part of some wild walk-offs the past few years which are always good for a rush. Dogs may be down, but never out.

What are your hobbies/passions outside of baseball? Baseball is a lot of my free time right now between playing and coaching, but I try to fill the rest of it with family and friends.

What was the greatest accomplishment in your life? Graduating college is probably the biggest to date. Looking forward to what’s on the horizon.

Who is the most influential person(s) in your life? Definitely my Mother and Father. Been through it all and supported since Day 1.

Do you have any pets? None currently. Hoping to add a team mascot in the future.

How does your significant other handle your baseball habit? She’s always been supportive and knows how much staying with the game means to me.

Tell me something about you that people wouldn’t know. Not much left after this interview – I’ve probably said too much already. Gotta keep a little mystery.

What drives you to keep playing ball every summer? The boys. And all the new merch (obviously).